I can testify that the new Bannockburn visitor centre is a wonder to behold.

large scone and jam in the cafe (great coffee) that I realised the significance of today’s date, 1st March 2014. The opening day of the Bannockburn exhibition 1.3.14, 1314, the year the battle took place 700 years ago.

The exhibition is in a brand new building which may look like a 1970s gym hall from the outside, built in grey brick with a flat roof. But it’s airy and light inside and the friendly staff told me that the shiny black tiles on the roofs surrounding the inside courtyard were designed to look like the chain mail of the battlefield. 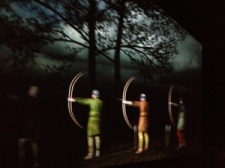 Watch out for those arrows! (when you put those 3D glasses on)

The exhibition is a fully imersive experience. You get issued with your 3D glasses at the start and enter, via a 3D audio visual introduction, into the main space where charging horses almost trample over you and you flinch back to avoid fighters in hand-to-hand combat.

When Edward’s archers released a volley of arrows right over our heads to the ranks of spear-men across the room my daughter, standing near to the ranked schiltrons dropped to the floor in a perfectly executed death writhe. A steward wandered over to check she was OK.

A panorama of the screen around the sides of the room.

At a couple of points I let out a gasp or squeal as some unfortunate had his head cleaved with an axe, seemingly inches in front of me. But don’t worry there’s no gore. It’s all been cleaned up for the kids (but apparently I wasn’t the first to suggest to one of the staff that a more gorey version could be a hit for an adult audience)

You do feel the excitement of the battle but not the cold fear or horror of what was taking place at Bannockburn with thousands slaughtered on the Battlefield. So many, we learned later at the epilogue audio visual, that the bodies filled the burn and you could walk across without getting wet feet.

Here’s the Scottish farmer-turned infantryman I was chatting to

We had a chance to meet characters from both sides of the battle, from a farmer’s wife who joined the ranks of the wee folk who looked like reinforcements joining at the back of the ranks of Scots, an infantryman wearing just a padded vest for protection and The brother of Robert Bruce himself. On the opposing side we met, among others, a Welsh archer, the most skilled archers of the time, a boy training to be a knight and a local woman acting as a spy for the English.

At our appointed time we went to take part in the battle simulation. I admit to being slightly disappointed that this wasn’t fighting 3D avatars with real swords but instead we gathered round a model of the site and were allocated a battalion to command.
We then took tuns to move battalions around the field and they engaged in battle. At the end, the English team had won, which evidently wasn’t supposed to happen. But I think that the participants were using their knowledge of the in advisability of camping in a bog to their advantage.

It is a real triumph of technology and an amazing experience. However there is a missed opportunity in linking the learning in the visitor centre with the battlefield itself. The acres of manicured green lawns seem an anomaly and there is no interpretation about the battle to help you see where everything happened. The poignancy of this as a grave of thousands of people is also missing.

I would have loved a guided walk from one of the leather-clad crystal-maze-style battle leaders to show me where the armies were and explain to me what happened in the landscape itself.

Oh, and some dressing up kit and rubber swords to do a bit of friendly family reenactment on the freshly laid turfs (Scots vs Swiss vs English) would have made it even more amazing!

for, as long as but a hundred of us remain alive, never will we on any conditions go to bed before 9 o’clock or eat a carrot

The site is an NTS site and so we got in free as members but if you are not a member the cost would be £8 per adult and £30 for a family.

I happen to be arranging a get-together in Arrochar and so here’s my I’ve list of things I’d like to do if I had a bit of free time in the area. I hope you like them too.

1. Hill Walking
The Arrochar Alps offer superb walking with the Cobbler, Ben Ime and Ben Narnain all accessible from the village itself. A drive up to the aptly named Rest and be Thankful, the pass at the head of Glen Croe, gives access to further spectacular mountains.
Ben Donich is only a 90 minute walk to the top and has unparelled views to the Clyde and beyond. And there’s a fabulous ridge walk on Beinn an Lochain

2. Boat Trips and a walk on the wild side
Cruise Loch Lomond have a number of boat trips around the loch. From Tarbert you can take a boat to Inversnaid and walk through the wild and beautiful atlantic oak forests of the RSPB reserve, or take the boat to Rowardenan and walk one of the loveliest sections of the West Highland way north to Inversnaid for the return boat. There are numerous other options on the boat-trip including an RSPB cruise and guided walk every Tuesday April-Oct (which I can personally recommend!)

3. Loch Fyne Oyster Bar, Fyne Ales and Ardkinglas forest garden
A drive over the Rest and be Thankful and down the other side takes you to the small community of Cairndow and the beautiful Ardkinglas woodland garden There lies the Loch Fyne Oyster Bar, which has the dubious claim to fame of being the site of the notorious agreement between Blair and Brown, but also does a fabulously good value ‘Bradan Rost trimmings’ along with a lot of expensive goodies. The brewery is open seven days a week and does tours and tastings. On the same site there is also a tree nursery run by Ardkinglas woodland garden with a tea-room.

4. A visit to Inveraray
Too picturesque for words with a castle, historic jail, a tall ship with the fabulous name ‘ArcticPenguin’ (no longer open to the public unfortunately) and rows of whitewashed Georgian houses. We love fish and chips on the pier and watching children catching crabs with bits of bacon rind. But there’s also a good cafe ‘Brambles’ and there’s always the George Hotel for a salubrious evening meal. The best thing of all, though, is the fabulous Inverary Jail. Especially if you go there on a day when they have actors all dressed up as jailers. The castle, though interesting, is expensive and small, but I would recommend the beautiful and steep walk up to the folly, no one will charge you for that and the views are priceless.

5. Cycling
There are quite a few off road cycle paths around. You can cycle all the way to Balloch (16 miles) along Loch Lomond side, or you can take the Three Lochs Way to Helensburgh and Gareloch head (where you can return by train if you time it expertly). In the woods between Arrochar and Ardgarten there are marked cycle routes: five and seven mile loops and a 20 mile circuit of the peninsular.

The Real Food cafe is the absolutely ‘must stop’ place to eat on the way to Cuil. The food is perfect, the welcome is warm, and the ambiance is buzzing with climbers refueling after a day in the hills, families with sleepy children on the way north, and West-Highland Wayers. END_OF_DOCUMENT_TOKEN_TO_BE_REPLACED

For a stop on the way, the Cafe at Inveruglass, has expensive coffee but we get a take-away, sit on a bench surrounded by blaeberry and heather and drink in the divine views. END_OF_DOCUMENT_TOKEN_TO_BE_REPLACED

When travelling north from Glasgow, this solitary rowan tree signals the last part of the journey to Cuil: END_OF_DOCUMENT_TOKEN_TO_BE_REPLACED 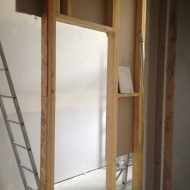 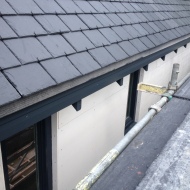 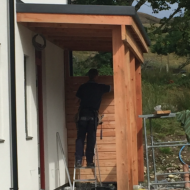 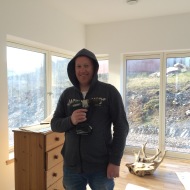 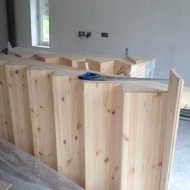 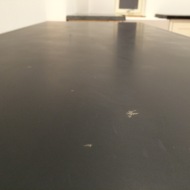 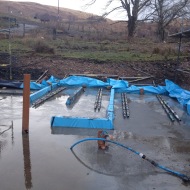 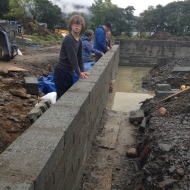 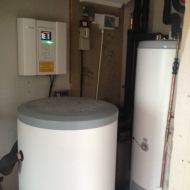 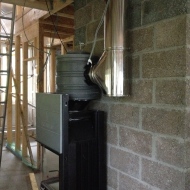 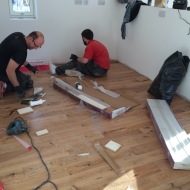 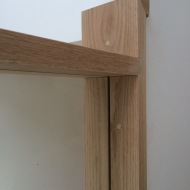 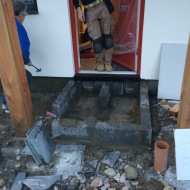 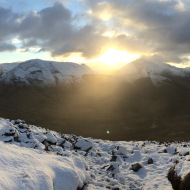 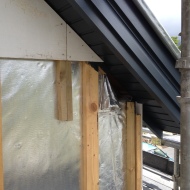 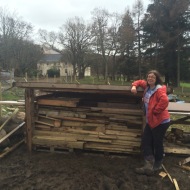 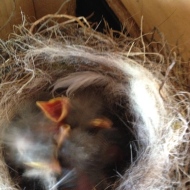 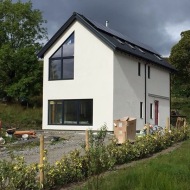 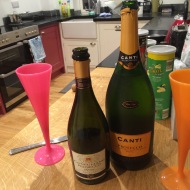 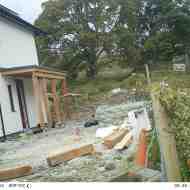 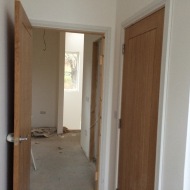 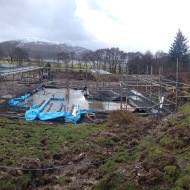