Have you ever spent all afternoon making a piece of ikea furniture and you sit back feeling rather pleased with yourself and, just as you set off to make yourself a well- deserved cup of tea, you see a large, essential and important element still  lying on the floor. ‘Where the hell is that supposed to go? You shout in exasperation.
Remember that feeling?
Now imagine that you have a fully erected house and you are just starting to think of what colour to paint the bathroom*, when you look down from gazing up at your wonderful edifice and see a large significant looking piece of metalwork sitting at your feet. The kind of bit of metalwork that would hold a couple of beams and take a very significant role in holding a house in an upright position. 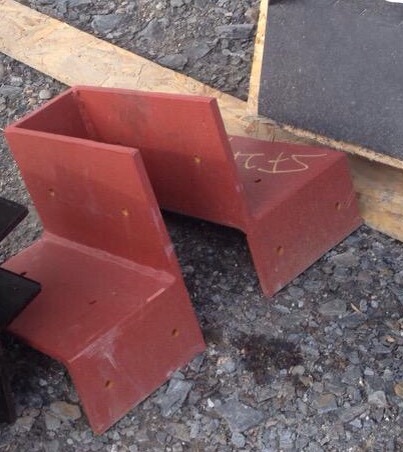 This is exactly what happened to me a couple of weeks ago. I was showing long-suffering husband the wonders of a house upright when he pointed to the piece of metalwork on the ground in front of the house. (It hadn’t been there the las time I was at the house).
We had just finished wondering to ourselves ‘where the hell is THAT supposed to go’ and started to search about for the number of the contractor, when our neighbour, the farmer, popped over to  pass the time of day and ask whether we’d seen one of his free-ranging cows on her wanderings.

‘What’s that’ he asks, pointing at the metalwork

‘I was just asking myself the same thing’ I mumbled in reply.

‘Funny, we’ve got something a bit like that, but bigger, lying at the end of our track’

We headed over to his track and there lay an even larger piece of metalwork, one deigned to hook over one beam and take two more beams. 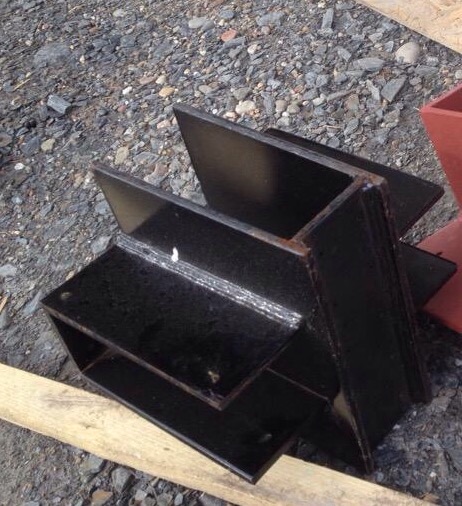 ‘Oh dear, I think that must be ours.’
I could just about pick it up. With help I got it back to the house, took some pictures and emailed them to the contractor. I put the next stage on hold until we knew what was going on.
A week later I was back at the plot with the chap from the framing  company.

It turned out that the larger piece of metalwork was a shoe for the centre of the house to hook over a beam and hold up the beam that holds up the ridge beam. 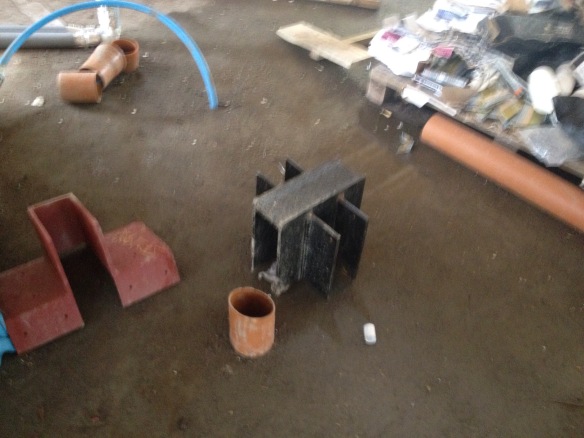 It seemed to be rather a miracle that the house was able to stand up without it. The framers had bodged some hangers for the beams, which were holding it all together and which explained why the short beam at the top of the stairs was held in by nothing more than a few nails driven in at an angle. 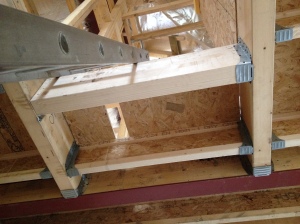 Theres now a hanger on one side but the beam is still held up by nails on the other….
The other large piece of metal was a specially commissioned shoe to act as a retrofit to replace the original shoe which meant that it could be slipped over the existing beam, and under the other and bolted into place and wouldn’t necessitate the dismantling of most of the structure to put it in. 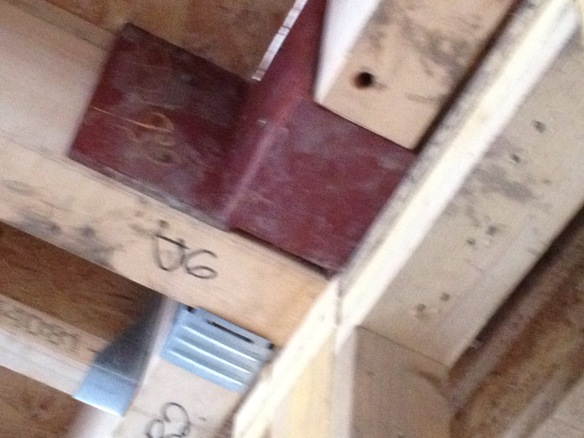 Well that was a relief (of sorts) the plan was OK-ed by our engineers, and fitted successfully. (with a little panic when I first saw it and thought it wasn’t installed in the right position – but it was, thank goodness). It could have been good to know about the issues in advance of coming across the pieces of metal scattered around the neighbourhood but it is, at least, one of the numerous issues sorted and dealt with.
And now I have a large piece of metal which I suppose I could sell on e-bay. Or have it as part of a very over-engineered bench at the front of the house. Something to remind me of the trials and tribulations, stresses and strains, hubris and horrors of building your own house.
* slight exaggeration

3 thoughts on “The mystery of the missing metalwork”