There were some issues with the timber kit erection. Some I knew about, including the missing beam shoe and a myriad other things; and some I didn’t.

There will, inevitably, be an asymmetry of information about the house build between myself and the builder, especially when you know as little about building a house as I do.  I was worried about things I didn’t know about that could have gone wrong. It was pouring with rain, every day the rain was more torrential, everyday more drips were appearing in corners and every day I seemed no closer to finding someone to do the cladding for the house.

Unfortunately, as well as leaving me with all sorts of issues to clear up, Builder2 also let me down on the cladding. This was something they had said they would do for me straight after the build but, when it came to it, they said that they had too much time pressure from other timber frame erections they needed to do. Since I had naively assumed that they were dong the cladding, I didn’t line up any alternatives and was left with a half-built house in the mid-march torrential rain, scaffolding sitting there doing nothing, and no realistic prospect of getting it sorted in the near future.

All the various difficulties I have encountered can be traced back to a decision.  The first misguided decision was to build a house in the first place. But deciding to go on and get the house built (see blog) when the architects had received no tenders was inevitably going to bring glory or annihilation, and most probably the latter.

It was all going swimmingly to start with; one of the builders who we had sent the tender to, and who came highly recommended, was getting stuck into building the house next door. He had the diggers on site, portacabins, a loo. I called him to ask whether he would consider doing the foundations drainage and stuff while he was on site and he agreed to do that. He couldn’t do the rest of the build, but he could arrange the slater, underfloor heating, plumber and electrician. Oh goodie, we could start. And so Stuart became Builder1. 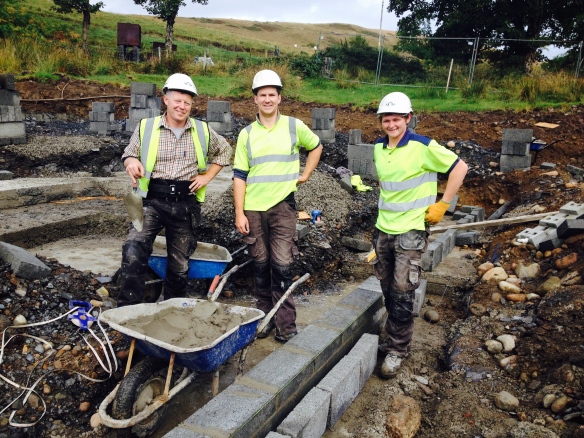 The foundations appeared; effortlessly, beautifully, perfectly, and everything went to plan. The architect fretted a bit that the foundations might not be the right size so I bought a huge tape measure and we went to measure them. Each wall of the house was accurate to within 1-3 mm – in fact it was probably my measuring that was inaccurate. Nothing was a stress for Stuart. He navigated my questions and requests and general ignorance of building with the calm of the Dalai Lama. I decided that faith, hope and love are really all you need to build a house. 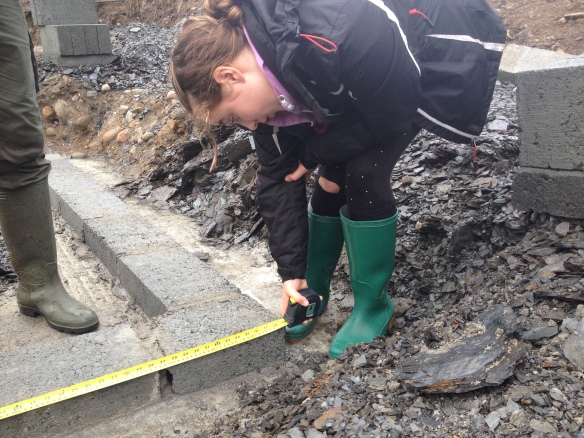 So when I found out I had been let down by Builder 2 I went  to plead with Stuart.  Up until that point, Stuart had mainly managed to get by in discussion with me with a reassuring ‘Aye yes, that will be fine’ and a pensive ‘’Aha, yes’,  (except when advising on how we should build the foundations).  But unfortunately I didn’t get the hoped for ‘Aha yes, that will be fine’ this time.   Stuart couldn’t help with the cladding, he was building two houses close by. The rain was particularly torrential the day I asked him and Stuart was building strip foundations on a site with a depth and consistency of mud that hasn’t been seen since the Somme. The trenches were filled with water, and I wondered whether those scuba divers that work on oil rigs could be persuaded to build West Highland foundations when they are off-shift.

I had to look elsewhere for the cladding.