We packed up in a hurry, there were moths from the trap to be Identified, the thermal imaging equipment to be taken down from the hill, and our bags and bags of kit to be transported down to the pier.  We didn’t pour away the water we hadn’t used. Just in case we didn’t get picked up – the supply of freshwater is a shallow sink-sized reservoir half way up the hill, on a seepage line. And it’s a favourite haunt of the gulls who have adorned it with  poo and feathers.

The weather had changed to perfect blue skies and gentle winds and we headed out to survey the nests on the bird cliffs.

As we circled the island the cliffs rose up covered with gannets. Birds were everywhere. Gannets hanging like saltires in the air twisted briefly and then dropped from the blue sky, hitting the surface of the sea like an torpedo. We saw an immature one, a dark cross folding to an arrow and then a line and I wondered what it feels like to dive out of the sky at 100 Kmph for the very first time.

Small stacks beneath were crowded with guillemots, stock upright with white tummies and chocolate backs, like miniature penguins on an iceberg. Then suddenly they launched into the water all at once towards the boat rowing their wings like a frantic oarsman in an attempt to take off.  When a couple realized that they wouldn’t make it before the boat passed them, they dived suddenly into the smooth oily water.

All to soon it was all over and we were heading back to Girvan, and real work: computers, meeting rooms, and hundreds of emails. 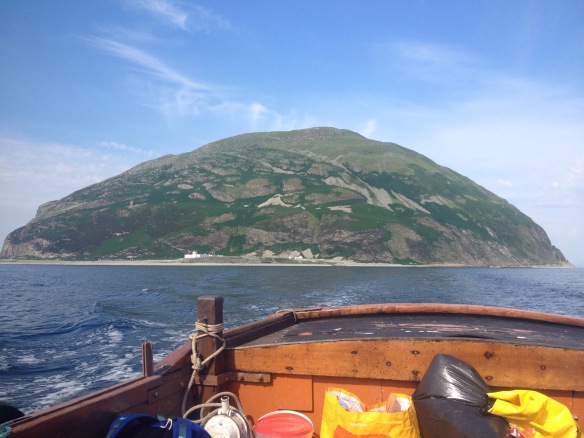 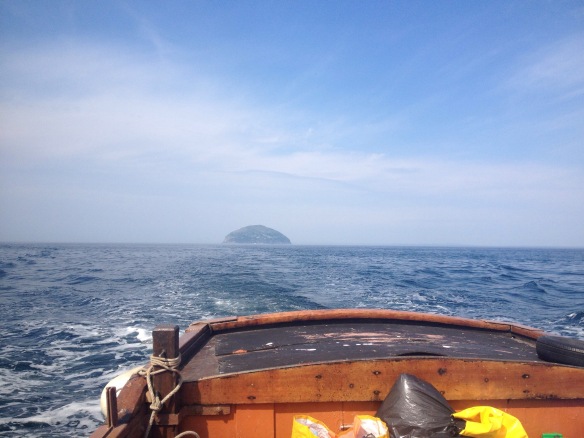 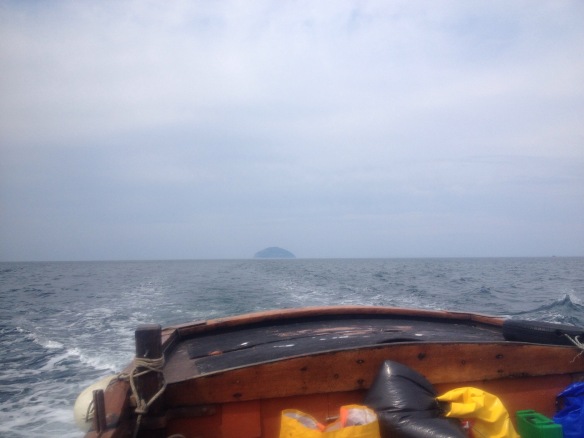 Bye Ailsa.  See you next year. I hope.