I’ve been holding it together pretty well for the past year while building this house. And actually far longer than that. I didn’t lose my wallet in 2015 or 2014 and I don’t think I lost it in 2013 or 2012 and probably all the way back to 2010. I did lose my phone last year and my house keys a couple of times over that period. Oh… and I dropped my work keys right in front of the front door of work one night (I no longer have a set of work keys…)

But I’ve been about as together as I’ve ever been with respect to keeping my belongings with me over the past few years. It’s all been military precision and ship shape and Bristol fashion compared to the chaos of my University years.

However it all seems to have gone to hell in a handcart in the past month. In the past five weeks I have lost my wallet four times. Twice on trains to work meetings (returned via station lost property both times) and then once somewhere in the vicinity of Ballachullish, yet to be found.

Yesterday I made a temporary wallet out of duct tape and put my third set of brand new cards into it. This was a wallet I wasn’t going to lose. I had a meeting in Balloch followed by a meeting in Edinburgh. It was all going well, an effective meeting and all on time for the Edinburgh meeting. But when it came to cycling from Waverley to the Royal Botanic Gardens of Edinburgh I realised I had left my bike in Balloch.  And when, after my RBGE meeting, I discovered I’d lost my wallet yet again I had a moment of despair and a flashback to my university days.

While I was at University I went through nine bikes in nine terms. A couple were stolen, a couple just broke down irreparably, one I wrote off in a head on collision with another bike – front wheel hitting front wheel with such force that my bike buckled, my head made contact with the head of the person on the other bike and I was transported, I remember not how, to Addenbrookes hospital to be treated for concussion. One was jumped on by a fellow student disappointed in love (referenced in previous blog).  And at least twice I simply lost the bike.

There are a lot of bikes in Cambridge and, when you’ve got a lot of different places to go and people to see, and things to organise and essays to write, keeping track of where you left your bike can be a challenge.

Fortunately this time at least I knew where I’d left the bike. It was locked up at the station in Balloch and I was due back there the next day for another meeting. So nothing lost.
However it filled me with despair that I had only had possession of those last bank cards less than 12 hours before I lost them again.

I turned my entire bag out in one of the Botanics glass-houses after the meeting. As the fact that my wallet wasn’t there sunk in, I heard a beautiful bird-song, that sounded like a robin but a bit different. I looked about and noticed sitting almost on my foot a beautiful robin singing gently to me from inside his little body – not the full-blown-beak-open song I’m used to. It certainly cheered me up. That and the bright yellow papaya lying on the brown earth of the glasshouse, which I picked up to smell to check it was real. So, not the total end of the world then, in the big scheme of things, but to add insult to injury, my return rail tickets were in that duct tape wallet too and I needed to get home for a significant family occasion.

Simple, I thought, I’ll just blag my way through the barriers at Waverley. After all, while traveling alone in Peru during one of my ‘gap years’ immediately before my PhD, I’d blagged my way all the way back to the UK from a Andean village called Caraz where everything I had with me was stolen: bag, tickets, money, passports, everything. All I had was six bread rolls in a plastic bag that I had just bought. I managed to get back to Lima, find a place to stay, negociate police reporting, replacement passport, replacement tickets, and everything else through pure blagging and persuasion. It was a bit stressful but I did it. However the folks in Peru must have been a bit more tender hearted than the Scotrail guys as there was absolutely no getting through that barrier without a ticket. 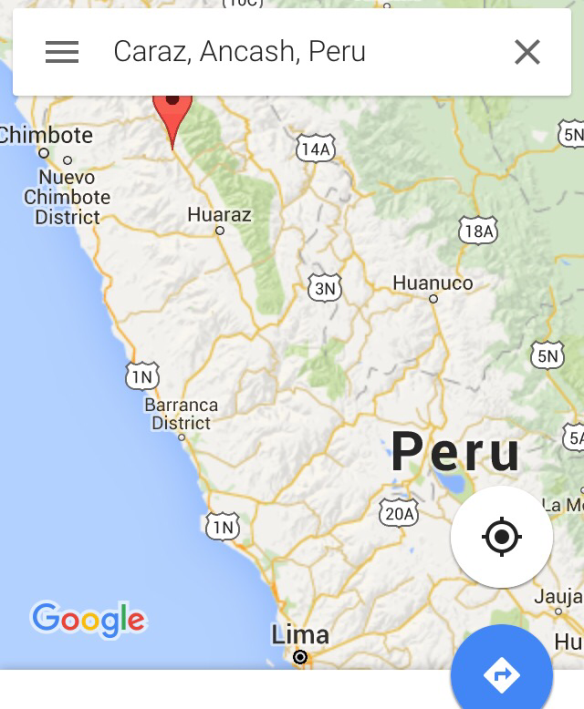 Caraz to Lima: that’s a long long way to go with nothing but six white bread rolls in a bag  (google maps tells me it’s 300 miles)

Eventually I found out that there was a mechanism by which someone I know can buy me a ticket. But they can’t just call up or do it online, no. They actually have to go to a station in person to make the transaction (and pay £10 extra for the privilege). I called long-suffering husband. When he had stopped laughing long enough for me to issue him with instructions on how to release me from Waverley station I went to find a place to charge my mobile. I found £1.20 in small change at the bottom of my bag and went to see what kind of comfort that could buy in M&S food while I waited. It turned out to be one minuscule packet of honey roasted salted cashews.

I’m rather puzzling to myself why I’m having a spate of losing things now, when the house is nearly completely finished as I surely can’t be as stressed as I was before. I suppose it’s because things I’ve put off are now all crowding in demanding to be done and  work has been even more demanding and rewarding and challenging and wonderful than usual.

I think the prescription has got to be the following:

1. Finish everything with the house once and for all – there’s too many odds and ends to keep track of at the moment.

2 Stop organising new things whenever I have a small breather and a little space to think.

3. Get a bumbag/wallet that hangs around the neck of the type you’d buy to go traveling on a gap year. In fact, come to think of it,  exactly the item which I had, the day my bag was stolen in Peru, left in my main rucksack, rather than had attached about my person.