I must admit to being somewhat single minded in the past few months about the house-build. It’s been hard to think about anything else. I hope I didn’t let that cloud my judgement of what my entire family want for Christmas. Well it’s the combination of that, and a singular lack of money, brought about by the self-same house build.

Every member of my belovèd family will get an edited, formatted and hard-back-printed copy of my blog from the very beginning. I managed to get it down to 194 pages. I hope they like it but, since my parents are my blog’s number one (and perhaps only) fans, it’s sure to get a happy welcome there. I didn’t get one for the tween-agers you’ll be pleased to know – my judgement hasn’t slipped that far.

In addition to the house-build themed Christmas presents, we also had a house-build themed Christmas. Over four days we managed to transform the house into a livable space and transform it back into a building-site, every surface covered. We decorated, painted special slate worktop stuff on the surfaces, then tried to work out why it went all smeary and sticky. We put up the post box/name plate for the house, Cleared up enough dust to switch the MVHR (mechanical ventilation heat recovery) on and cleaned all the windows and frames of bits of plaster and stuff.

Christmas Eve was taken up with wholesome and thrifty pursuits like making plaid covers for the freebee Salvation Army cushions (granddaughter and grandmother) and upholstering the same plaid onto chairs I’d bought as an impulse Salvation Army purchase (grandpa without much input from other granddaughter).

Boxing Day was all about ridding the site of wood-based detritus. The waste stuff (water-logged chipboard, OSB and reams of  cardboard) was thrown onto a pyre and sent in clouds of smoke into the ether. Farewell to the year. Farewell to a life totally taken up with this house build. 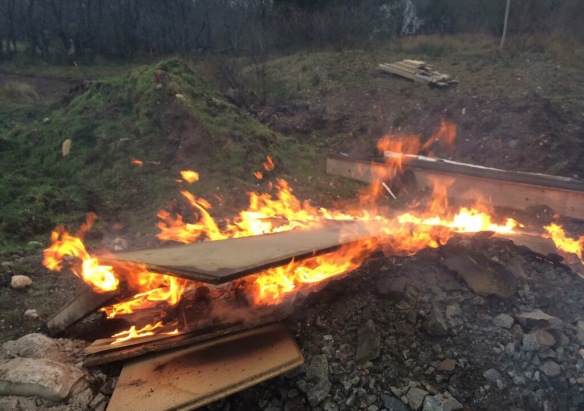 Wood that could be used in future as firewood or for other things had to be moved from the enormous wood-mountain I had allocated it to at the very start of the build.

I’d chosen that site specifically as the only place I could put it that I would never have to move it again. Ever. (Erm… So why are you moving it Kat?) Well you never can account for where people decided to put their water pipes in the historic past, and we discovered that one runs right under my wood-mountain and that it needs to be dug up. And we discovered it has a leak that has turned the back of the house into more of a mud bath than usual.

I made some of the wood mountain into a woodshed as husband moved the wood with the concentration of a someone playing a real-life game of Tetris. Each time making the journey across a no-man’s land of mud which became more icky, more squelchy and more sucky with each crossing, until it threatened to eat our wellies whole, and some of the rest of us too. 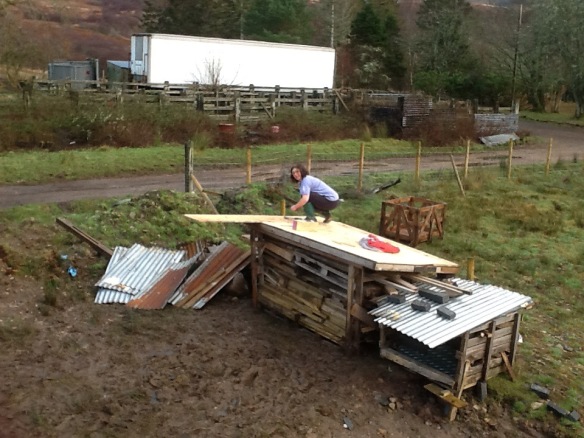 In the spirit of using the less pleasant experiences of the build for good, I’ve incorporated a memory-nemesis into that shed. Half of the dreaded partition wall that sat for months in the newly erected and sopping wet house without being fitted and then warping beyond use is now the shed roof. The OSB wasn’t in best condition which isn’t a surprise given it’s sat in the pouring rain since April but I patched it up with bits of the Mystery OSB which is lying around in the fully-built house that no one knows what it’s for.

“Don’t saw off the bit you’re standing on” I joked to myself as I sawed through a long bit of OSB hanging over the woodshed roof. Mum and dad had finished packing to leave and were hanging out of the upstairs bedroom window with husband watching progress on the woodshed roof.

It was only a few minutes later that I forgot my own advice to myself and found that progress was easier with a foot on either side of the saw and merrily sawed away until….. CRACK!!!

The saw made the final cut and I fell dramatically and theatrically into the mud-field we had created. It wasn’t quite headfirst. I am told by my audience that it would have been an award-winning bellyflop if I hadn’t landed too far over on my side. Both arms sunk up to the elbows in mud: face and hair was plastered: grit between my teeth.

It was one of the funniest things that I can remember and I was consumed by hysterics (as was my audience, augmented by the kids who ran to see what all the noise was about). It was a long time before I could regain my composure enough to finish what I needed to do, strip off my dirt-caked clothes, and make my way to Christen the beautiful shower with mud and grit. My only regret is that, although husband had taken some video of me making the shed roof, he switched off just at the moment it would have been useful to capture on film.

Nevertheless, the memory of myself wallowing in mud after my cartoon-esque schoolboy error will stand me in good stead if I need cheering up in future. And, as some psychologists at Cornell University have found, giving memories rather than material presents at Christmas gives a more lasting pleasure. So perhaps Im glad that, at a time when every available penny is being spent on the house build, I’ve given such an unique, entertaining and enduring present to my whole family.

Ps. Some photos in the immediate aftermath of the mud-dive exist, but I am afraid that they will remain classified for evermore.  I’ll leave it up to imagination 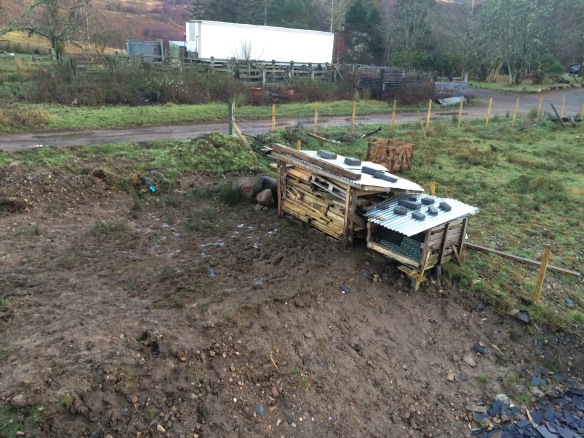 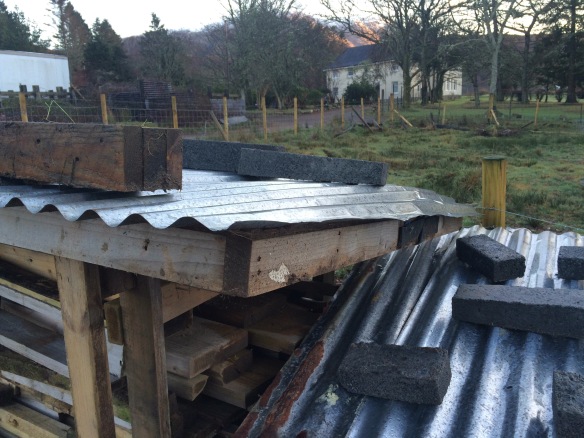