I’d thought about cancelling Christmas a couple of times. The first was with 11 days to go to the big day, as I returned from a weather-swept stomp to a bothy in the Borders where I was celebrating a friend’s 100th bothy with a large party of bobble-hat-wearing revellers. I managed to catch up with Tom, a university friend who made who the kitchen, and discovered that the units were in at an angle, not merely set out further from the wall.

I sat and despaired a little in a layby in the sleet and wondered whether to put back the worktops and cancel Christmas while I was at it.

The second followed the next day, with 10 days to go, when Stephen the stonemason came to fit the worktops and we discovered that all my fears were founded and we’d need to move the fridge plug then move the kitchen then get the stone-mason back again.

But it’s really quite hard for me to accept that anything is hopeless or impossible. If I’ve said I’ll do something, I do like to do it.

Plan the day and dae the plan.

Planned to camp on a beach on a West coast island but the weekend weather forecast looks pish?

Plan the Day and Dae the Plan.

You’ll have a brilliant time even if it rains and if the sun peeks out you’ll only regret staying at home as you imagine what it would have been like swimming in gaspingly cold water or collecting mussels and roasting them in a camp-fire.

Planned to do a couple of Munros but you’re feeling a bit tired and think you might just get to the next rise and head to the pub?

Plan the Day and Dae the Plan.

The mountain will still be calling you from the pub and imagine how brilliant it will feel to have done the whole walk.

Planned to have Christmas at a house that is highly unlikely to be fully habitable.

PLAN THE DAY AND DAE THE PLAN.

No one ever enjoyed having an easy life. …. Erm. Hold on.

It wasn’t a good moment when I realised I’d lost the tap for the kitchen sink and that there wouldn’t be time to get the tap to the house and for the plumber to fit it before Christmas. But that didn’t really worry me, we’d have a hose through the window from the outside tap (well that was before I realised that the drainage for the sink wasn’t plumbed). And anyway we have a dishwasher (which turned out not to be plumbed either….)

No, the low-point came with 2 days to go, as I arrived at the house in my rented van full of a sofa and a sofa bed and chairs and boxes of stuff to a dark dark house and realised how much I had to do to make it habitable for Christmas.

Tom had moved the kitchen into the right place that day and the worktops were due in the next. But I had a van full of stuff which I’d hoped to Tom would help me unload, and a bottle of wine I’d hoped Tom would help me drink, but he was done unexpectedly early and was away down to the road to let the dogs out.

The joiners still had at least a week of work and one of the bedrooms was entirely taken up with skirting boards. The cooker hood and washing machine were still sitting in the lounge and everywhere was dust and dust sheets and bits and pieces and no furniture or food or crockery or cutlery or saucepans or decorations or even drying-up-cloths. I went out to deliver Christmas cards and invites to a Boxing Day party (Christmas evidently not being enough challenge of its own…) round to all the neighbours and that’s when I got a view of what Christmas could be like if we’d just go to my parents like we usually do. 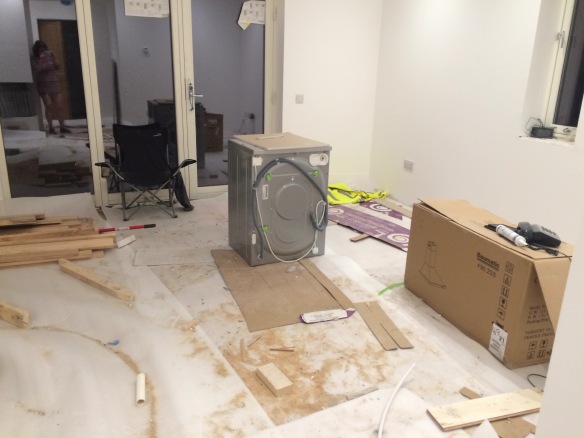 A neighbour’s house was decorated beautifully with greenery and berries and perfect lighting. They opened the door and Christmassy scents of cooking and bonhomie wafted towards me. Their grown-up sons back for Christmas came downstairs to say hello and showed me photos of the whole happy family eating fondue in their alpine-style garden shed exquisitely decorated for Christmas. I left weeping quietly, hugging the spirit level I’d borrowed for the stone-mason, for comfort. Is it too late to cancel Christmas and go to mum and dad’s if they have already started packing to come to Cuil?

Plan the day and Dae the plan.

At least if I don’t have anyone else to unload the van, I can go back and petition the neighbour’s sons to help. So long as they don’t tell me how lovely and relaxing and stress free it is going home to ones parents for Christmas.

In the end Stephen the stonemason and his assistant insisted on helping me unload. Being used to shifting huge slabs of stone around, they made light work of the contents of the van and headed back to Glasgow well before dark.

By evening I had a livable sitting room at least – two sofas and a coffee table made from the cooker hood topped by the slab of ash, intended as the seat at the bottom of the stairs. And the next day I’d be returning with the family and food and many hands to make light work of the rest of the house.

I’ve been thinking about a line of poetry to carve into the edge of the wooden worktop in the kitchen. Something to reflect the landscape of Scotland and people’s connection with the landscape. Been thinking Norman McCaig or Kathleen Jamie but now I’ve got a plan.

PLAN THE DAY AND DAE THE PLAN

That has got to be carved somewhere in the house – but it needs to be near the door. On the way out to adventures. How about on the ash bench?  I’ll be sitting on there getting my boots on ready to set forth into the rain (And inevitably yelling blue murder at the kids trying to get them out of the house and off their electronic devices which, I’ll tell you, needs the utmost in unshakable resolve.) 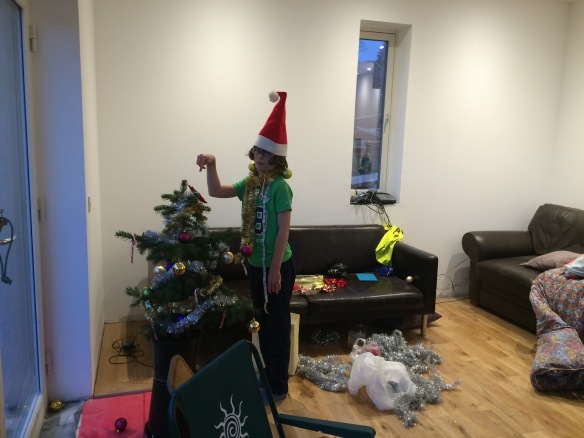