Today I was storming. I was like Kat on fast forward. I was totally on fire.  Before I’d even had a coffee I’d peeled all the sticky protective film from the sliding door windows. And painted half of the bits of wood the curtain rails are mounted on. As I painted, mind configuring and reconfiguring my monstrous to-do list,  I thought how I am not really suited to the care, attention and exactitude demanded by the tasks of painting and decoratorating. I just hope I never have to undo any of those screws ever again.

As an aside; Have you ever wondered why MDF doesn’t just come in white? It comes as a rather icky off- grayish white anyway, so why on earth can’t they make it white and save everyone a load of bother?

I drank my coffee while balancing on the toilet cistern. But after nearly over-balancing a couple of times while trying to reach the wood, I calculated that it would only take a minute to fetch the step ladder whereas it would take me an hour to clear up the mess if I dropped the paint from this precarious position (and that I would take considerably longer than that to recover from plummeting into the toilet pan). So I went to get the ladder.

The windows and doors were open to bring some of the lovely morning inside, but the backing track was not the singing of birds or the gentle waving of the leaves, it wasn’t even the constant annoying low hum of the heat pump or the MVHR or even the irritating whirring of the biodisk.  It was the dulcet tones of Jamie the farmer rounding up the cows with a vocabulary that would make Malcolm Tucker blush.

A few weeks ago I’d been in the garden chatting with Stephen when a wall of swearing like I had never heard hit us like a tsunami, swept past us and up towards a terrified looking white van driver standing paralysed at the gate. He had made the mistake to open the gate and not shut it, or shut it when it should have been open, or perhaps drive through it when he should have waited for the cows to pass by. But neither he nor I could work out what he should do as the tirade of swearing accompanied everything he did. So he stood there like a rabbit caught in the headlights of one of those huge American juggernaughts, sometimes jerking this way or that in an attempt to resolve the sutuation.

After the first coat was done I thought I’d have a proper look at the new curtains for the triangle window. They have been specially made to the right shape and I have been rather enjoying the challenge of working out how to hoist them up using a cunning pulley system.

One evening, as a distraction from the more disturbing parts of a thriller we were watching, I made a working model from a cardboard box, a plastic bag, some wool and a whiteboard marker as a makeshift pulley. The curtain pleasingly lifted when I pulled the wool.

I was excited to see how things would work in reality.  I looked about for the curtain hooks. Nowhere to be found. I’d forgotten them, which was especially frustrating given that I must have bought some on at least two seperate  occasions.  so I held the curtain up to get a view of what it would look like and found it was too short.

Disaster. It was made specially, but Shona the curtain maker must have been working to the dimensions of the recess I have, rather than the curtain dimensions. I could hardly lift it anyway but I managed to stuff it back in a bin bag to take back to Glasgow.

Next was another layer of paint and then a trip to the hardware store for masking tape and something to help me put a giant sticker on a window. I came back with one of those rubber paddles that window cleaners use.

Then my piece de resistance. The window sticker for the glass on the sliding door.

screen protector onto a large bit of glass. The last screen protector I put on my phone only got three large bubbles. Oh, and a few smaller ones. Well, to be honest, there was almost more bubble than stuck-on screen saver.

But, with the help of my window cleaning squeegee and the urgency of not having had any lunch yet, I did it. (one small bubble). Now this was properly fun, better than painting, better than curtain hanging. I needed to share my joy  with another human being. I dashed outside yelling at Jamie the farmer who was at the cow pens just behind my house.  I told him how clever I’d been and how he must come and see.

“Actually I’m a little busy at the minute” he said in an understated fashion as he held a cows neck and tried to get a syringe into her mouth “and by the way Kat, you’re totally [expletive deleted] wired to the moon”.

Wired I was, and over the next two hours I sewed some off-the shelf curtains together to make one the right size (may have to do one of them again as it just didn’t line up), painted the skirting thing on the stairs (and painted it a second time) and hung some curtains. No time for lunch but fortunately there was a large bag of kettle chips in the snack drawer which had somehow escaped the hordes of scavenging teenagers who were at the house over the Easter break.

Then there was trying to read the heat meters and organising things and clearing up. Cleaning the windows and putting up the rest of the curtains and blinds would have to wait. I had to get back to glasgow.  I had a child to meet, feed, take to scouts and then get to a committee meeting about getting use of some land for the community by 730pm.

I eventually screeched to a halt in front of our house at 728pm just as aforementioned daughter had tired of waiting for me, got her sister to give her dinner and was starting to take herself off to Scouts. In the end I managed to take her to scouts, get to the committee meeting (even more wired to the moon after belting down the A82 at speed -unfortunately for the other four at the meeting) and even get back to scouts in time to pick up a pile of them and distribute them to their various houses.  Quite a productive day really.

Here are some more photos of things that have happened since the last blog a while ago.

We have a patio. Lovely lovely and the sun is shining all the time at the moment.

Just look at that geology on Ardnamurchan – a giant ancient volcano. Thanks to British Geological Survey mappers I now can look at geology every time I’m in the bathroom. I should put a laminated key to the colours in the drawer for people. 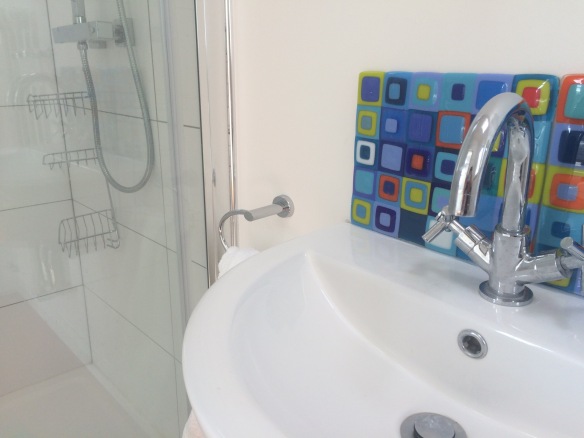 Fused glass splashback by Lucy Head stuck on at last. 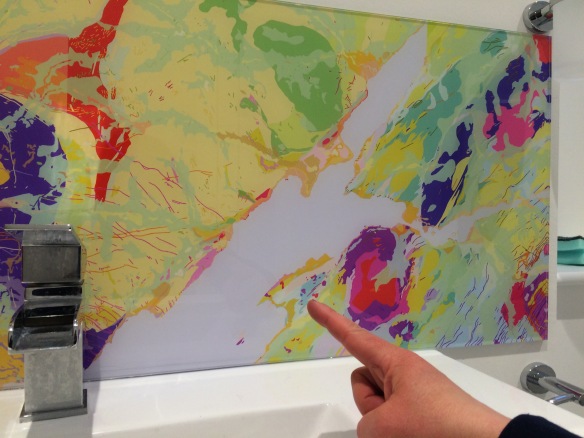 Look. That’s Cuil bay there. Lots of interesting geology round and about. 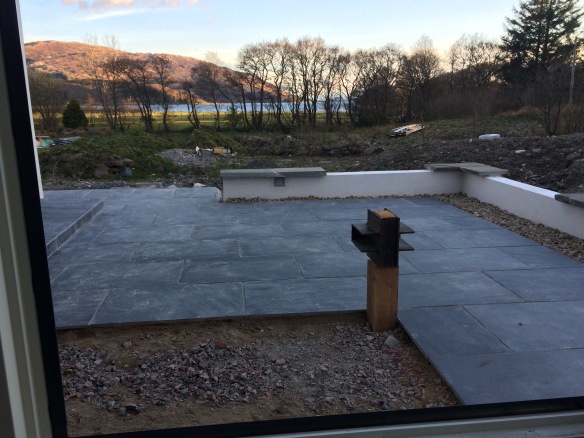