Well it was slightly annoying to loose the car keys. But the train journey back to Glasgow from Mallaig has been wonderful. It is one of the world’s great journeys and I can see why. As I yelled ‘wow look at the amazing view’ ‘it’s the Harry Potter viaduct’ and ‘Britain’s highest mountain’ the kids sat and read the magazines I had bought them as the necessity of the five hour train journey ahead started to sink in.

It’s not the first time that I’ve lost a car-key, or indeed all sorts of other important items like wallet and house keys, but it’s the first time for a while it has necessitated drastic action. I’ll be on the 820am train back to Mallaig in the morning with the spare.

However perhaps it’s a fitting ending to a weekend visit to see a piece of music which has encompassed the whole experience, especially the journey.

The concept of a piece of music exploring the imitation of birdcalls in Gaelic song fascinated me since I heard about it last spring. Being an ornithologist (or a lapsed one at least) I was captivated when I first heard Gaelic songs for bird calls on a soundpost at Kilmartin museum, and the thought of a piece of music written for performance on Canna seemed irresistible.

Now, as I said, the peripheral stuff – travel, accommodation, feeding – were an integral part of the event. And if I were organising an ideal weekend trip away it would look pretty much exactly like this did: a remote and exquisite island teeming with wildlife, camping by a beach black with basalt sand and overlooked by an ancient and crumbing bastion on a tower of basalt columns; a start to the event in a marquee filled with scones and cakes of all kinds; and choice of tea coffee or whiskey (I admit to scrounging a second dram); and ending with the camaraderie of a bonfire on the beach until the early hours. It also included a rousing sing-along to ‘the rattlin’ bog’, but I think that was entirely spontaneous….

But of course these were just the bookends to the work itself. We sat on folding chairs or cushions on the dirt road by the old pier and waited in silence (yes even my children) for the performers in dark tweed dresses and scarlet neoprene to begin. I used to be quite good at bird song ID but this really challenged my knowledge. The programme, containing a reproduction of the hand written scores and translations of the Gaelic which could have helped me was buried deep beneath waterproofs, plastic bags and other russtley things in a very rusttley bag. This was the kind of silent expectant audience where a single creak from a buttock moving on a chair would draw looks like daggers from those about. I decided to forgo the cheat-sheet.

Each movement was preceded by a sound recording evoking a habitat and bird assemblage: a machair with calling waders and skylarks, a seabird colony with guillemots, shags and fulmars, and mountain slopes ringing with the haunting and bubbling calls of manx shearwaters.

As the sound of a gull in full defensive mode swooped across the loudspeakers my husband and I instinctively ducked; two field seasons in a colony of 50,000 pairs of gulls makes you wary like that. I was excitedly elbowed in the arm when he realised that the next movement was on a theme of gulls (we met in a gull colony). The sound of the guillemots took me back to a summer spent in the arctic below an enormous colony of auks. Happy days

The singing beautifully imitated bird calls as the singers placed themselves about the shallows, rocks, or up behind us, depending on the habitat they were evoking. The sound soothed, washing over in waves, the feeling akin to lying on a real machair looking up at the sky and hearing the waders display above, or laying belly-down peering over at a seabird colony, smelling that ammonia smell of dried guilimot poo (I love that smell). When I recognised a call in the music I felt elated. The kittiwake ‘Hu-ru rui’ was a recurring theme as was the cry of the oystercatcher, an ululating ‘Pil- il-il il il il il’. I feel I would have so much more to gain on another listen.

Later around the fire we shared experiences of the piece, among other things (including an artist’s response to the killing of the first sea eagle to fledge from the East Scotland reintroduction). Everyone I spoke to had connections to the arts, most had been to art school and were practicing artists. They seemed to have a very different experience of the piece to me, none seemed to feel the need to know what sounds were representing which birds. When I met one of the performers on the ferry homeward and enquired as to whether I might have heard a curlew in the piece (which on inspection of the programme I think was a gull’s laughing cry), she confided that she didn’t actually know which sounds were which birds, she had learned the music and read from the score.

There were evidently far fewer ornithologists in the audience than musicians and artists and, as I walked through the woods and up to the heathered escarpments above with the family later, listening out for the birds we could hear, as we always do, I pondered on a theme I have pondered before. I wondered whether there is more enjoyment in being able to name the species we share our surroundings with, than in simply enjoying a natural sounds for their own sake. Does being able to know how many species are singing, what they are and why their sing, and how they live their lives enrich ones enjoyment of the chatter of a seabird cliff, or the uplifting sounds of a woodland in spring?*

I do go along to arty things when I can, but I often feel that I don’t quite ‘get it’, the time I went along to see Hertzog’s ‘Antarctica’ at the GFT leaps to mind: I sat utterly bewildered as I saw, around me, the knowing nods and of a generation of students from the Glasgow School of Art oozing understanding. But this time I did feel that I got it, in fact surely this was a piece where ornithologists could enjoy it just as much as the art people. (And, presumably to a Gaelic-speaking ornithologist it would be even more enlightening). Perhaps I’m just always seeking understanding, because that’s what I like, I’m a scientist after all and finding out how the world works makes me happy.

The work was perfect, just as it was, of course, but I just couldn’t help wanting to take all those artists there on a walk to see and hear the real thing: the oystercatchers, the gulls, perhaps a night walk to hear the manxies. Probably because it’s my job and passion to get people excited about nature and because, for me, a performance like that drives me, at least, to want to find out more about the birds and about the Gaelic.

Canna, for example, is a real conservation success story. In a superhuman and vast effort, the NTS has freed the island from rats, while conserving the endemic Canna mouse, and Manx Shearwaters and other ground and hole nesters are starting to recolonise. A tremendous good news story in the midst of so much bad news for nature.

I am starting to see the advantage of losing my car key, we have been forced us to throw ourselves further into the experience of the journey as part of the piece, returning on the train via the wild landscapes of Morar, Lochaber and the vastness of Rannoch Moor and then gradually decompressing through the oak and birch woodlands of Loch Lomond and Loch Long until we started to enter the towns of West Dumbartonshire, and, only when we were ready for it, arriving back in the city. A far more enriched experience, especially with a glass of prosecco, than driving through the landscapes focussed on the road, head down….

Now I just need to get that train back to Mallaig with the spare key….

For information about the performance and a video click here 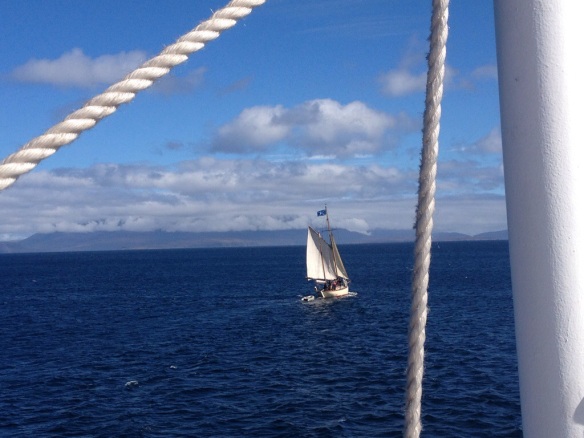 * (however any metaphor with art breaks down irretrievably on a cursory interrogation….)

2 thoughts on “Canna, Gaelic birdcalls and a lost car key”