Last week, in the monthly meeting with my team at work, We did one of those psychological tests that tells you what kind of team-worker you are. I usually have a healthy scepticism about that kind of stuff,  but a friend recommended it and I thought it could be good for us.

It was rather like one of those questionnaires you see highlighted on the front of an issue of Cosmopolitan lying in your dentist’s waiting room. The one you pick up because you just can’t stop wondering “Well what Disney character AM I most like?” or “So what IS my superfood/compatible dog breed/ ideal male jawline?”.
However this quiz has apparently more basis in research and psychology and is called the Belbin Team Role Inventory. It’s supposed to help you see what roles people play within the team.
We all filled in a quiz sheet earnestly, added up the scores and then chatted about what it revealed.
It turns out, rather unsurprisingly for me, and for the people in my team, that I scored ‘null points’ in the team roles of Monitor Evaluator and Implementer. However, in the category I was convinced I’d score lowest, Completer Finisher, I actually achieved one solitary point, which pleased me beyond measure.

It doesn’t need me to explain to you that being rather challenged in these three areas is probably not a help when you reach the final stages in a build.

Or, come to think of it, at any stage in a build.
The Implementer is systematic, organized and does what needs to be done, not just those tasks that are most exciting. OK. Well let me think. There might have been a little bit of unsystematic thinking in the project (see here).

The monitor evaluator is prudent, a good critical thinker who makes shrewd judgements and is immune to getting over-enthusiastic. Hummm. Yup. Quality of decision-making may have been somewhat questionable.

The Completer finisher is orderly, conscientious and doesn’t start what she can’t finish. Right. Well, I suppose I admit I may have been neither orderly nor conscientious, but I jolly well am determined to finish this thing.

So given that all these seem pretty useful traits for getting a house built, and they are about as far from being me as it is possible to get, I’m actually left asking myself how on earth I have managed to get this far?
It turns out, also rather unsurprisingly again, that my highest scores were (jointly) Plant (rather a pleasing name isn’t it?) and Coordinator, with Resource Investigator trotting along as a close second. 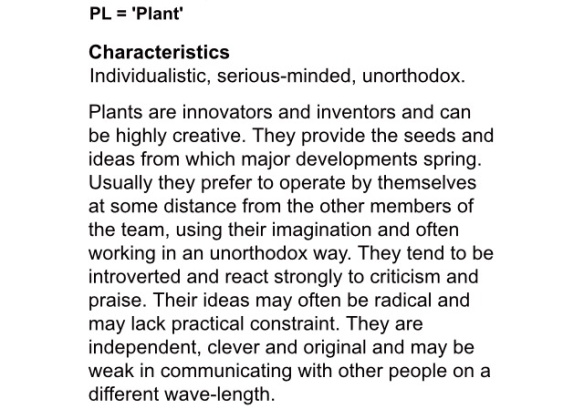 Being a Plant (innovative, creative, unorthodox and having ideas lacking in practical constraint) may explain why I have not really enjoyed much of building a house, except telling the stories in my blog, and thinking about the splashbacks – 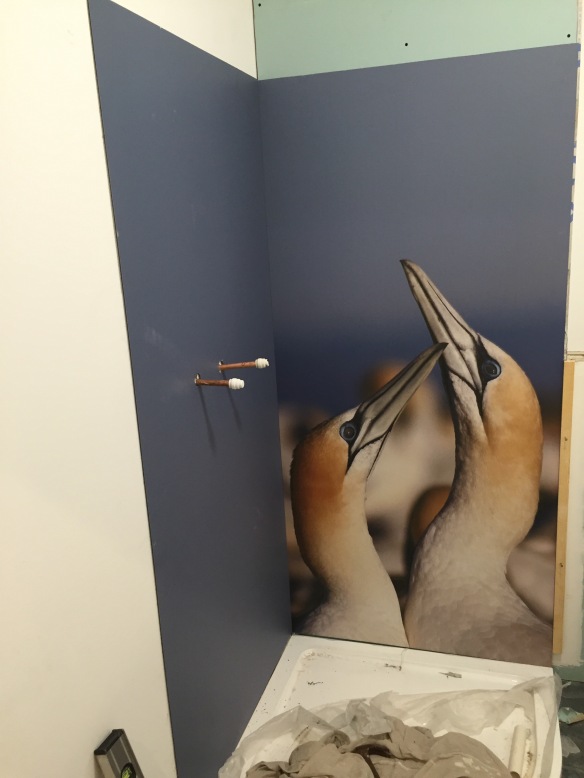 Gannets on dibond in the downstairs shower,

fused glass from an artist for the en-suite,

and a geological map on Perspex in the main bathroom.

But it could also explain how I got started on such a ridiculous project in the first place (by throwing aside thoughts on the practicality of the idea).  Had I been a Monitor Evaluator this project would definitely not have got off the starting blocks.

I’m not sure I recognise myself entirely in either the plant role or the Coordinator (calm, confident, good at delegating, trusting and controlled) but I certainly have found that tackling problems calmly is the way to go. And I have stayed calm through some really big problems (eg  here and here )

Perhaps it was the Coordinator in me exhibiting, what my quiz sheet tells me is the distinguishing feature of coordinators, ‘causing people to work towards shared goals‘ that did it. And the delegating. Who knows. Or perhaps the Resource Investigator in me (extroverted, enthusiastic, curious, communicative – ah that sounds more like it…) finding the right people and resources for the project?

Whatever. I suspect that the conclusion of this exercise is that there are many ways to skin a cat, or indeed to build a house. And people do it according to their own personalities and inclinations and with a greater or lesser success.
But one conclusion I can come to, having worked through and discussed this Belbin quiz with my team, is that if I had been able to draw on the diversity of talents in the people I work with, building this house would have been a whole lot easier, and more pleasurable.

However, to state the bleeding obvious, it hasn’t just been me working on this house (or it really wouldn’t have got anywhere at all) everyone in the project has contributed with their different approaches and personalities, from architects to builders, engineers to electricians. And one of the reasons I have managed to keep going in the face of my own natural inclinations is because of the people working on the project. It turns out it really has been a team effort, and I couldn’t have done it alone.

1 thought on “The Self build: An amateur psychologist’s analysis”