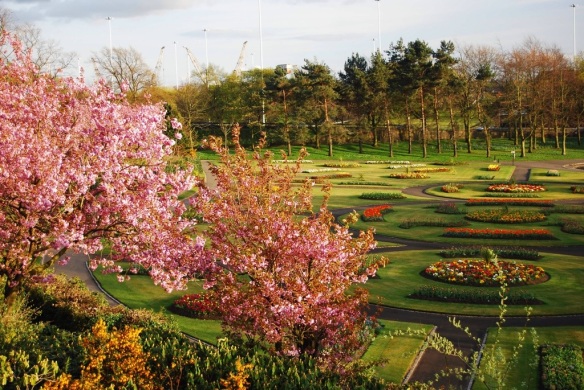 Glasgow City Council have put about a quarter of the area of my local park, old blaes pitches, now lately grassed over and quite riddled with puddles, up on a commercial property website to seek bids.

It isn’t the first time locals have had to fight a change of use for that area – it was proposed as a car park for Scotstoun Leisure centre a couple of years ago- a proposal that was seen off by local campaigners.

However this time two community groups seem to be gearing up to fight each other over the use of the pitches. Friends of Victoria Park propose a community orchard for the nearly 7 acre site, and have been at the forefront of fighting commercial plans for the site – getting a turnout of 200 people to a local meeting to discuss council plans for the Park.

Another group – Broomhill sports club (BSC) – a club for local kids that runs football and netball training for all ages from P1 and operates out of various venues but has no home of its own, is also interested in using the pitch. They have proposed all-weather pitches, changing facilities and a cafe for the site which will be self funding and available for schools and other groups to use at other times.

The options are being very much portrayed to the community around the park as an either/or choice. Only one or the other can prevail.

The two groups have, apparently, tried to come together on a joint proposal but talks broke down. My analysis, that may well be wrong, is that the demographic of friends of Victoria Park is generally older without children still at home, and they prefer the quieter orchard proposal, whereas the BSC propose a model covering the whole area to maximize the area for sport, a building for changing rooms etc and to allow it to have economy of scale that would allow for it to cover costs, which would allow no space for the orchard.

Both groups are expert campaigners – they know how to raise profile and attract the media’s attention. The recent demonstration in the park against commercial use of the park got a front page mention in The Herald newspaper and BSC recently had an article talking about their long term plans for a stadium close to their west end roots (I’m wondering whether this is the Victoria Park proposal or some other place)
.

However there is a danger that, while two groups vie for local attention and council agreement, the actual local community around the park become confused, disillusioned, and distracted from the reality that the council is intending to use the park for commercial reasons. There is no one community position to coalesce around and many people shy away from disagreements locally and would rather stay uninvolved.

There is room for a third view. One where there is space enough for an all-weather football pitch, but not on the scale envisaged by BSC, but also for a community growing space and orchard. The old blaes pitches are vast, seven acres is far too big an area to have a manageable sized community orchard or community growing space/allotments. But also occupying the whole area with sports pitches and associated buildings, especially on the scale suggested by BSC would be too much for the park environment, and much of the area could be lost to community use.

Why can’t we have both better sports facilities and a community orchard? Let’s campaign for both. And let’s have a cafe too – some commercial activity is surely a good thing- we could knock through the fence separating the brilliant bowling/golf/tennis area and link the sports pitch up to be minded from there and convert and extend the little brick building by the bowls/tennis courts into a cafe and nice(r) toilets.

If we can get these two effective and influential community groups working on what would be best for the community rather than polarizing opinion around two, not mutually exclusive, options then we will win. If the two groups are set to fight each other, we are in a prisoners dilemma situation where the only winner will be the council who will find it far easier to get their commercial interests through.

I have written to my councilors and here is what they think …..

Also – why not let me know what you think – I have made a little survey. Please take the survey here.

9 thoughts on “The Battle for Victoria Park”