Everyone wants to make that first beautiful run down: snaking tracks down the newly-groomed pistes. But, given my recent(ish) experiences, I think that I need to work on cultivating my inner Swiss before I try again.

On the third day of the holiday I determined to carve some new tracks in the snow and rose before everyone else, pulled on gear, gulped down a breakfast, donned boots, picked up skis from the boot-room and was off. The walk takes about 10 minutes on a rising gradient but when I reached the slope to ski down to the lift I found that my boots had shrunk and were far too small to fit the bindings.

I had brought the wrong skis.

Quick back to the flat.
Quick hobble in ski boots down an icy road past the reams of folk now emerging to head to the slopes.
Arrive at lift at exactly the time I would have done without all the extra effort.

Next day I tried again, this time heading out even earlier. I shuffled to the ski slope in double-quick time, but before I could feel smug I realized that I had dropped one of my mittens on the way so had to trot back and found it lying in the road nearly back at the flat. ‘Oh well, still ahead of the pack’, I thought, and set off, once again, to the slopes. This time I found that, again, my boots wouldn’t clip into my skis. ‘But I definitely have the right skis’ I wailed to a group of teenage snowboarders who had been observing me hurry backwards and forwards… I had the wrong boots! I dragged myself and the pair of boots belonging to someone I was hoping hadn’t needed them in the past 20 minutes, back to the flat. On my second walk back to the flat I passed the rest of my party heading to the slopes with a leisurely breakfast in their tummies and a set of self-satisfied looks on their faces. I can’t say that a vision of the Hare and the tortoise didn’t swim before my eyes.

You might think that I would be annoyed at this experience but in fact I was rather delighted to find that the ex-rental boots that I bought for £5 in Aviemore in 2009 were pretty-much indistinguishable (at least to my eyes) from a pair used by an actual Swiss person in St Moritz. And there’s nothing like knowing that, for the price of a coffee in a mountain cafe, I have at least as good a pair of boots as anyone….

Spot the difference:
I admit one is purple and one gray, but in the dim morning light with eyes fogged with sleep, it’s surely an understandable mistake. The skis less-so, the ones I carted out were utterly different and 30cm longer than mine 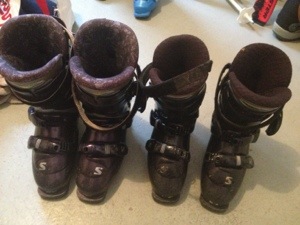