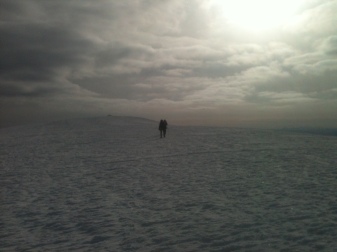 A hundred small, brightly-wrapped Easter eggs and thirteen pairs of little hands. A whistle signaled the start and, grasping plastic cartons, baskets and  a colander, they fanned out over the walled garden and started poking in holes and swarming into hedges.

A beautiful day, the first of our break in Easter Ross.  When we passed a sign for Easter Logie church on the way to this haven my daughter said ‘it must get very busy here at this time of year’ and we all chuckled.

After an exceptionally cold March, ‘the coldest in 50 years’, said the newspaper headlines,  snow is lying on the hills and in this flat landscape I just cant stop looking at  the shining massif of Ben Wyvis.  While the children shout and hunt and run between clumps of frosted snowdrops seeking the glint of foil, my eyes are drawn back to the mountain.

Ben Wyvis is a high plateau rising in the flat plain of Easter Ross, especially distracting with the sun glaring on its mantle of white. The land between is flat, the fertile lands of the Black Isle and Wyvis, dominating the view, looks so close.  We’d packed ice axes, crampons, skis; relics from a time before children ‘just in case’ but today it’s Easter and a day for the kids.  After the egg hunt, a sports day with sack races, javelin, shot put, relay races, hurdles and a chaotic game of tig. And then out come the sandwiches, coffee and a chance to munch on the bounty of chocolate. Rooks rise croaking from their noisy shanty town in the beeches.

And then all of a sudden three of us were scrambling for rucksacks, maps; packing hats, crampons, malt loaf. A late start on a big mountain to mark the first day of British summer time.

Then we were gone. It was less than   half an hour since the suggestion of an expedition  up Ben Wyvis had been whispered, then amplified and echoed. And I was caught up in an irresistible slide towards the mountain.

We weren’t the only party making a late start. Cars were arriving as we packed and set off towards the ridge along a well-made path alongside a  stream. Little patches of snow started appearing at the sides of the path, gradually growing in size as we progressed. And then we came out of the trees and had a good view of the route to come. It looked a manageable size – not far – a person was sitting about half way up the ridge, in the middle of a cluster of little rocks. Then perspective suddenly shifted as the rocks started moving into a line and grew into people heading upwards. the seated figure was a truck-sized boulder and the top of the mountain a great deal further away than I had thought.

It’s a great feeling to be walking on a winter mountain . At first the snow was hard and consolidated, but it got softer as we ascended. We made our way over alternating shallow ridges of crusted windslab and  bare ground covered with friable ice. A flock of snow buntings took off from behind a drift of snow.

I stopped for a rest and saw two ptarmigan perfectly camouflaged in their spring plumage; patches of white and rock-grey. They were searching for food on a lump of moss and lichen a few meters from me. They looked up but didn’t start, supremely confident in their camouflage.

My companions hadn’t seen the ptarmigan, and were soon way ahead. Breakfast was a very distant memory and, chewing on a half-frozen malt loaf, I set on after them.

We gained the summit ridge at 4 o’clock.  The top of Ben Wyvis is a wide ridge, more a long plateau.  An arctic place, habitat of arctic hare ptarmigan, saxifrage, dwarf willow. The wind picked up as we reached the first summit. This is a windy place, rime ice  plasters anything with vertical dimension. The rime extends fingers towards the north east, pointing towards the wind that has brought this late spring arctic blast.

We rook some time time on the summit to put names into the landscape before us. To the east lay the Cromarty Firth and beyond that  we could see the oil terminal at Invergordon, a few miles from where we were staying. North were rolling hills and beyond, would be the northern rim of the Scottish mainland.

To the west and south we named the peaks: Ben Alligin, Sulven, Ben Dearg, the Cairngorms.

The sun was well into its descent as  we headed for home. A whole day’s adventure packed into an afternoon and finely balanced by the morning of family Easter ritual.

From  the grounded life of children and good friends to the sublime heights of Ben Wyvis.   It felt even better for the fact that it had been snatched from an otherwise earth-bound day; two halves of a perfect Easter egg.